Are your Docker builds taking forever? Docker can be a valuable part of your tool belt, or a constant source of annoyance.

This article will walk you through frequent sources of slowness when building Docker images for Python projects, and ways how you can avoid or fix them.

Let’s speed up an utterly slow Docker build together using the right high-level approach, easy to implement tricks and brand-new Docker features to speed up your build protect your coding flow from annoying delays.

If you prefer video, check out my PyConline AU 2020 talk “Speeding up Your Docker Image Build” over here.

Tip 1: Can you avoid building images?

Using Docker doesn’t have to be all-or-nothing. You can choose to use Docker for deployment, building self-contained images to production, but you don’t have to use it in development.

It’s perfectly fine to do either of:

If you choose to use Docker for development, keep in mind that there are different styles of workflows. When developing in Docker, it’s better to bind-mount your code into the running container and avoid rebuilds as much as possible. This way, you’ll keep your iteration times short and avoid busy waiting.

Tip 2: Structure your Dockerfile instructions like an inverted pyramid.

Each instruction in your Dockerfile results in an image layer being created. Docker uses layers to reuse work, and save bandwidth. Layers are cached and don’t need to be recomputed if:

To make good use of the Docker cache, it’s a good idea to try and put layers where lots of slow work needs to happen, but which change infrequently early in your Dockerfile, and put quickly-changing and fast layers last. The result is like an inverted pyramid. 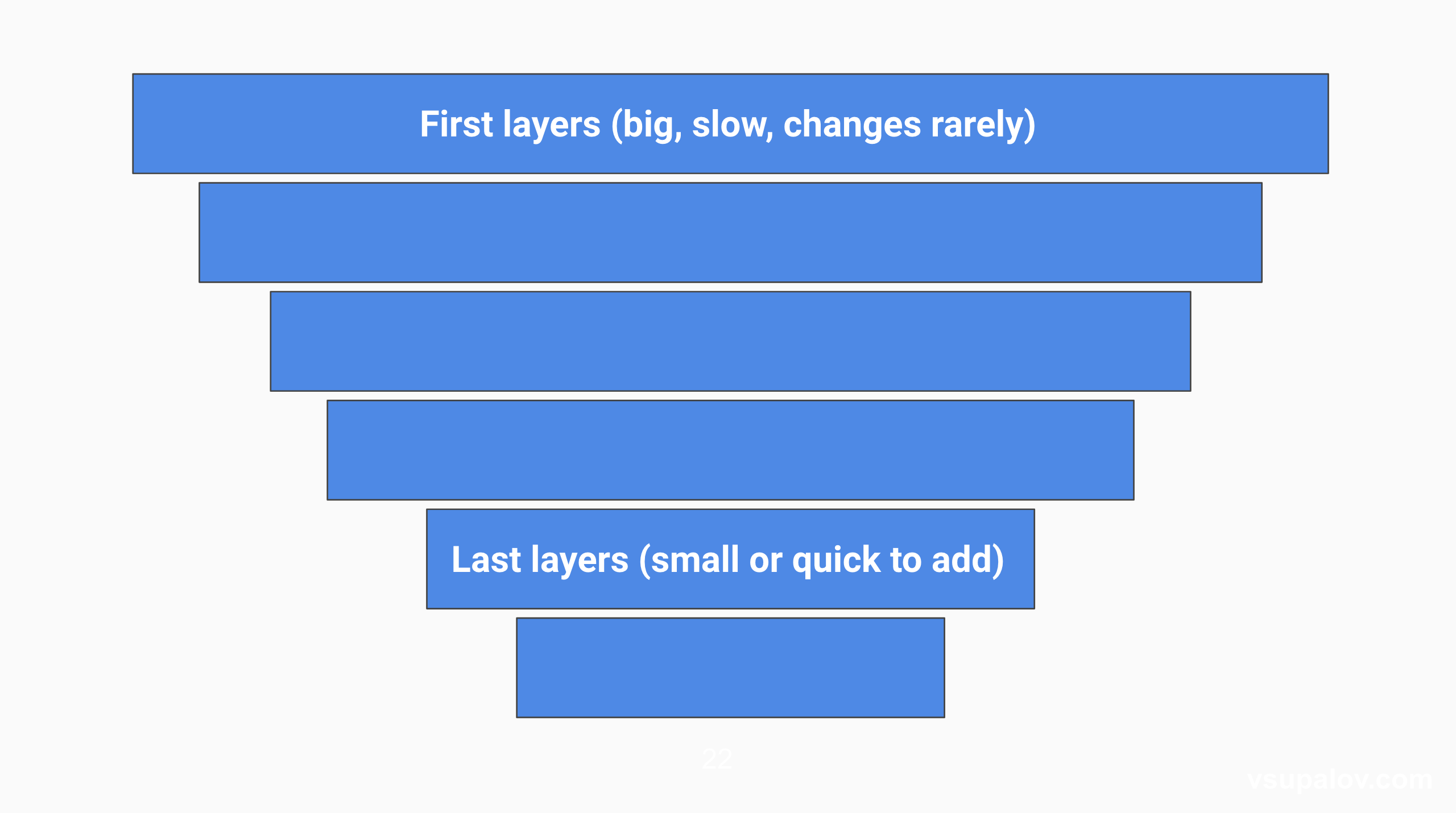 Make sure large and slow-to-build layers come first in your Dockerfile.

Tip 3: Only copy files which are needed for the next step.

Imagine we have the following Dockerfile snippet:

Every time anything within the code directory changes, the second line would need to run again, and every following line as well.

That’s a pitty, because the third line only depends on one single file from the code directory: requirements.txt. Here’s how we could avoid re-running the install step on every code change:

Now, the third line would only run if the file in question changes. Dependencies tend to change infrequently, so that’ll shave off a lot of unnecessary effort from the image build.

If you COPYing files, try to do so selectively. Only add the ones to the image which are needed in the next steps. You can add everything else “on top” as in the second example.

If your Docker image builds takes a long time downloading dependencies, it’s a good idea to check whether you’re installing more than you need to.

One more thing to keep in mind, is the default behaviour of your OS-level package manager. For examle, apt which is used on Ubuntu and Debian, installs “recommended” packages by default. Those are packages you don’t specify (or need) explicitly, but which are installed nevertheless because you might want to have them.

You can avoid this, by adding the --no-install-recommends flag like this:

This way, you will only get the packages you asked for and their necessary requirements, reducing the download and installation time while building your Docker image.

Tip 5: Use BuildKit with the new cache mount feature.

BuildKit is pretty cool. It’s a new image build engine, which can be used instead of the default Docker one. If you use it, you get more concurrency and cache efficiency, cool new features and useful UI outputs.

For the sake of faster image builds, the new cache-mount feature can help you to cache downloaded packages inbetween image rebuilds, even if your dependencies change and the layer needs to be rebuilt.

I hope you can use those tips to speed up your Docker image build.

There’s more to building good Docker images than making them faster. If you want to get an overview of the most important topics, check out my free “5 days to better Docker images” email course here.