ARG and env can be confusing at first. Both are Dockerfile instructions which help you define variables, and from within the Dockerfile they feel pretty similar.

Let’s make sure that you understand the difference, and can use both of them comfortably to build better Docker images without repeating yourself.

ENV is for future running containers. ARG for building your Docker image.

ARG values are not available after the image is built. A running container won’t have access to an ARG variable value. You can imagine the ARG and ENV as two overlapping rectangles: 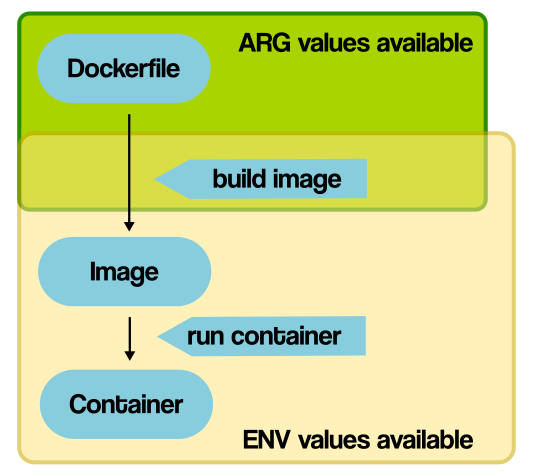 You can’t change ENV directly during the build!

Build arguments can be set to a default value inside of a Dockerfile:

but also changed by providing a --build-arg VAR_NAME=6 argument when you build your image. In a similar way, you can specify default values for ENV variables:

But unlike ARG, you can’t override ENV values directly from the commandline when building your image. However, you can use ARG values to dynamically set default values of ENV variables during the build like this:

You can read about it in more detail here.

Docker ENV and ARG can be confusing at first. I hope that this brief explanation has helped you understand the difference.

Would you like to learn more about Docker ARG, ENV, env_file and docker-compose .env files? Check out this in-depth guide to get a complete overview of the topic, so you have less trouble to build your Docker images and configure dockerized apps.